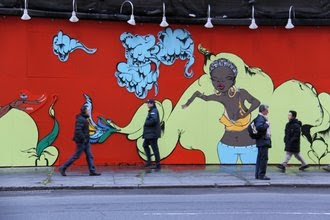 Times Square today is adding new outdoor public art — in paint, sound and video — to coincide with the Armory Show and other art fairs descending on the city this week.

The eight-story Nasdaq video screen will display “Black Sun,” the work of Alexandre Arrechea, every night at 11:50 p.m. until midnight. The video, which shows a wrecking ball repeatedly bouncing against the building, will screen through March 8.

Nasdaq has its own Times Square webcam so you can watch online.

Up in Duffy Square at 46th and Broadway, a sound sculpture by David Ellis and Roberto Lange will play percussive, rhythmic beats and tones generated by buckets, bottles, trash cans, paper shreds and cardboard boxes. The intention is to play on the public’s perception of trash.

A Project of The Times Square Alliance & The Cuban Artist Fund